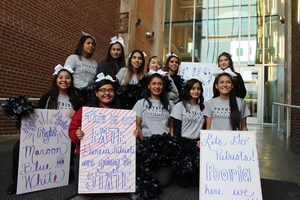 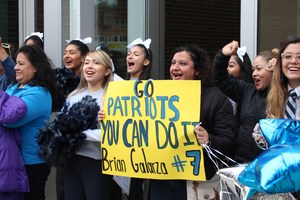 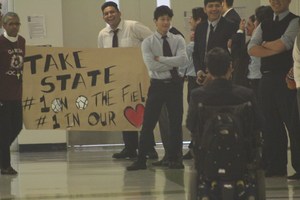 Patriot pride was on full display when Garcia High School hosted a surprise celebratory parade Friday to honor their IHSA Super-Sectional boys’ soccer championship win and kick off their drive to the Final Four.

Students, staff and parents gathered to send the team off with a chorus of cheers.

“We’re very proud to have a school whose students are high-performing athletes as well as high-performing scholars,” said Principal Lindsay Ahlgren-Blythe.  “Their championship season has given us all one more reason to be proud to be Patriots.”

On Friday night at 5 p.m., the Patriots take on Marquette Catholic High School (Alton, Ill.) in the Semi-Final game at the EastSide Centre in East Peoria, Ill.   The winner will advance to the state championship game, which will take place on Saturday at 5 p.m.